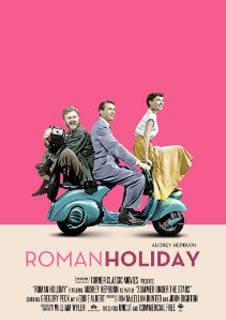 Audrey Hepburn earned her place in the galaxy of silver-screen stars with her performance as the protocol-weary Princess Anne who is determined to have some fun before she becomes confined by the limitations imposed by her official affairs of state position. On a diplomatic visit to Rome, Anne manages to escape her royal retainers and sets off incognito to exlore the Eternal City. She happens upon American journalist Joe Bradley (Gregory Peck) who, recognizing a hot news story, pretends that he doesnt recognize her and offers to give her a guided tour of Rome. Naturally, Joe hopes to get an exclusive interview, while his photographer pal Irving (Eddie Albert) attempts to sneak a photo. And just as naturally, Joe falls in love with her. Filmed on location in Rome, Roman Holiday garnered an Academy Award for the 24-year-old Hepburn. A classic romantic comedy, Roman Holiday is the ultimate heart-string fairytale that features one of the greatest endings ever to come out of tinsel town.