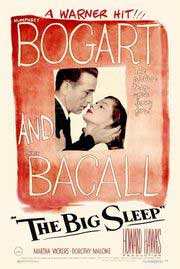 The definitive Humphrey Bogart/Lauren Bacall vehicle, The Big Sleep casts Bogart as Raymond Chandlers cynical private eye Philip Marlowe. Summoned to the home of the fabulously wealthy General Sternwood (Charles Waldron), Marlowe is hired to deal with a blackmailer shaking down the Generals sensuous, thumb-sucking daughter Carmen (Martha Vickers). This earns Marlowe the displeasure of Carmens sloe-eyed, seemingly straight-laced older sister Vivian (Bacall), who is fiercely protective of her somewhat addled sibling. As he pursues the case at hand, Marlowe gets mixed up in the murder of Arthur Geiger (Theodore von Eltz), a dealer in pornography. He also runs afoul of gambling-house proprietor Eddie Mars (John Ridgely), who seems to have some sort of hold over the enigmatic Vivian. Any further attempts to outline the plot would be futile: the storyline becomes so complicated and convoluted that even screenwriters William Faulkner, Leigh Brackett, and Jules Furthmann were forced to consult Raymond Chandler for advice (he was as confused by the plot as the screenwriters). When originally prepared for release in 1945, The Big Sleep featured a long exposition scene featuring police detective Bernie Ohls (Regis Toomey) explaining the more obscure plot details. This expository scene was ultimately sacrificed, along with several others, in favor of building up Bacalls part; for instance, a climactic sequence was reshot to emphasize sexual electricity between Bogart and Bacall, obliging Warners to replace a supporting player whod gone on to another project. The end result was one of the most famously baffling film noirs but also one of the most successful in sheer star power