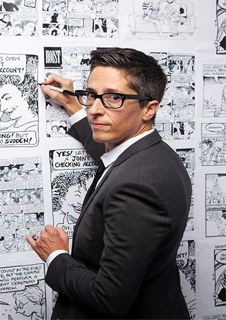 When it comes to queer expression, the only limits are the imagination. In 1980 the first issue of Gay Comix took that expression to whole new levels. No Straight Lines charts the rise of five pioneers of LGBTQ+ comics – Alison Bechdel, Howard Cruse, Jennifer Camper, Rupert Kinnard, and Mary Wings.

From Come Out Comix, Brown Bomber & The Diva, to Alison Bechdel’s Dykes to Watch Out For and her crossover hit Fun Home, the impact of these gay and lesbian comics is felt by the new batch of creative queers inspired by these torchbearers. Gay Comix emerged at a time when discrimination was rife, the AIDS crisis was emerging and LGBTQ+ communities were isolated. The comics artists spoke directly to a whole new world of readers.

No Straight Lines is an affirming, colourful and creative documentary to inspire us all. Directed by Vivian Kleiman, who joined us at GAZE in 2019, we can’t think of a better way to conclude the festival and explore what is possible with the flick of a pen. SMcG.