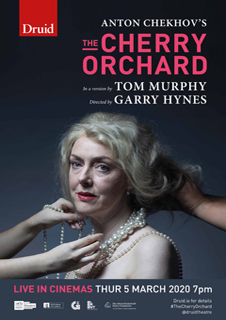 March 11th & 28th (Encore): A recording of the live performance.

In a first for an Irish theatre company, Druid’s production of Anton Chekhov’s The Cherry Orchard, in a version by Tom Murphy, will be live streamed to cinemas across Ireland and the world, direct from the Black Box Theatre, Galway.

An old way of life is dying out.

A country prepares for revolution.

And the cherry orchard? What will become of it?

Bringing together one of the world’s great classic plays with one of Ireland’s greatest writers, Druid presents Tom Murphy’s version of Chekhov’s masterpiece.