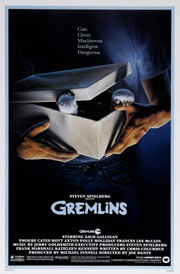 Classic creature comedy horror directed by Joe Dante and produced by Steven Spielberg. When Billy Peltzer (Zach Gilligan) is given the cute and friendly little Mogwai, Gizmo (voiced by Howie Mandel), for Christmas, he is told never to expose it to bright light, get it wet or ever feed it after midnight. But one night when a glass of water is accidentally spilled over little Gizmo, Billy soon finds out why he was told to follow this advice as Gizmo begins to convulse, producing five new Mogwai. As Billy and his science teacher, Mr. Hanson (Glynn Turman), then seek to find out more about the creatures, a series of events lead to the escape of a number of them; and due to their heightened intelligence they know exactly how to replicate themselves. Soon after, the town is overrun by a new breed of Mogwai - the 'Gremlins' - who are menacing little reptilian creatures, and far from friendly.