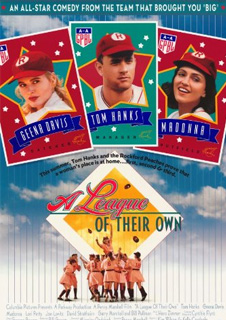 A League of Their Own

It's a home run with this hilarious and beloved comedy, starring Tom Hanks, Geena Davis and Madonna. With baseball lineups and locker rooms left empty during World War II, the newly-founded All-American Girls Baseball League brought talented women to the big leagues—and brought fans to the stands. The indomitable Dottie Hinson (Davis) finds herself leading a rag tag group of players who end up winning over the heart of their has-been coach, Jimmy Dugan (Tom Hanks). Lori Petty, Rosie O’Donnell and Jon Lovitz round out the all-star roster. Based on the true story of the pioneering women who blazed the trail for generations of athletes.